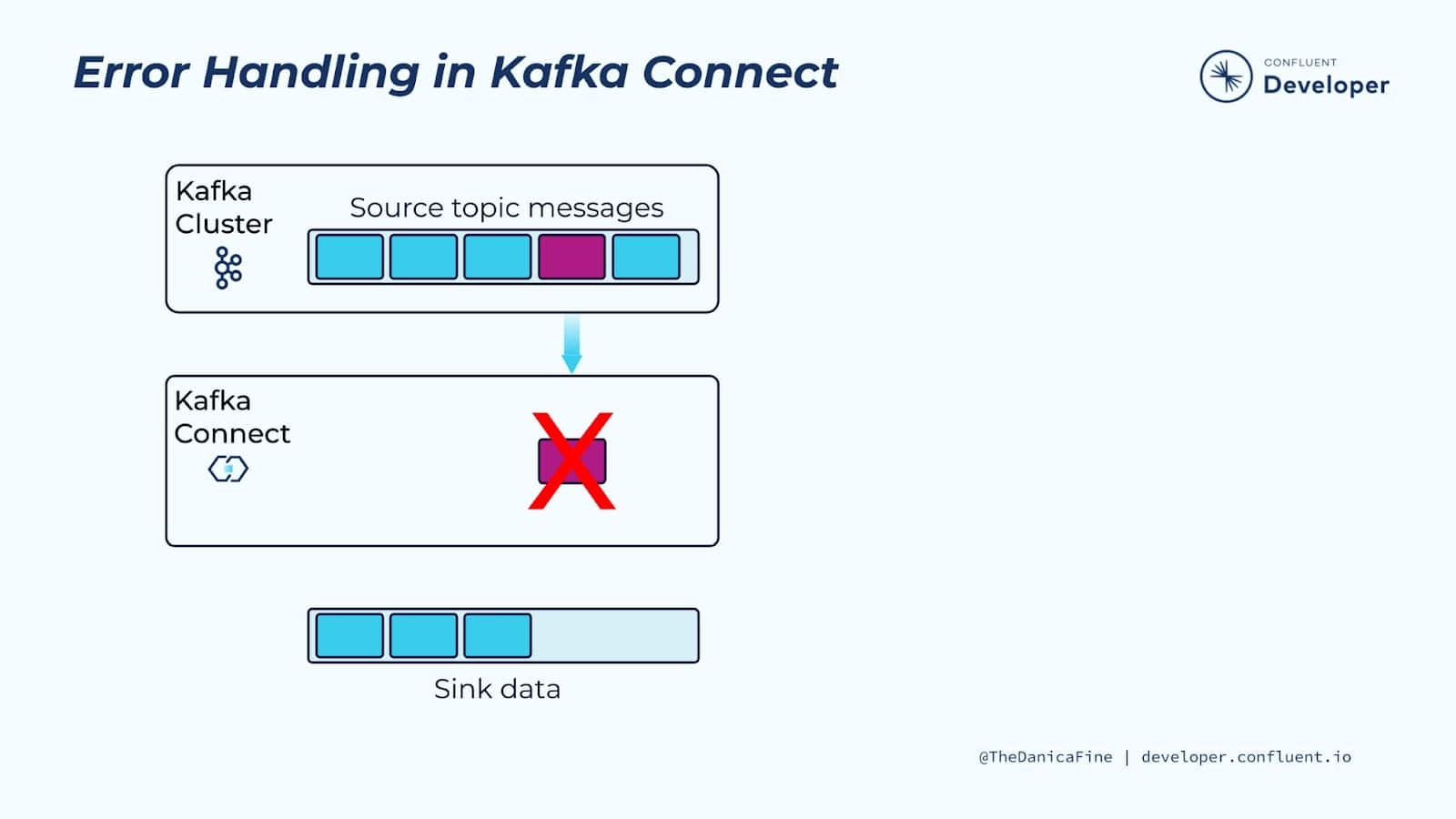 Obviously these different patterns are going to be useful in certain scenarios. Let’s examine some cases where these error-handling patterns are utilized. 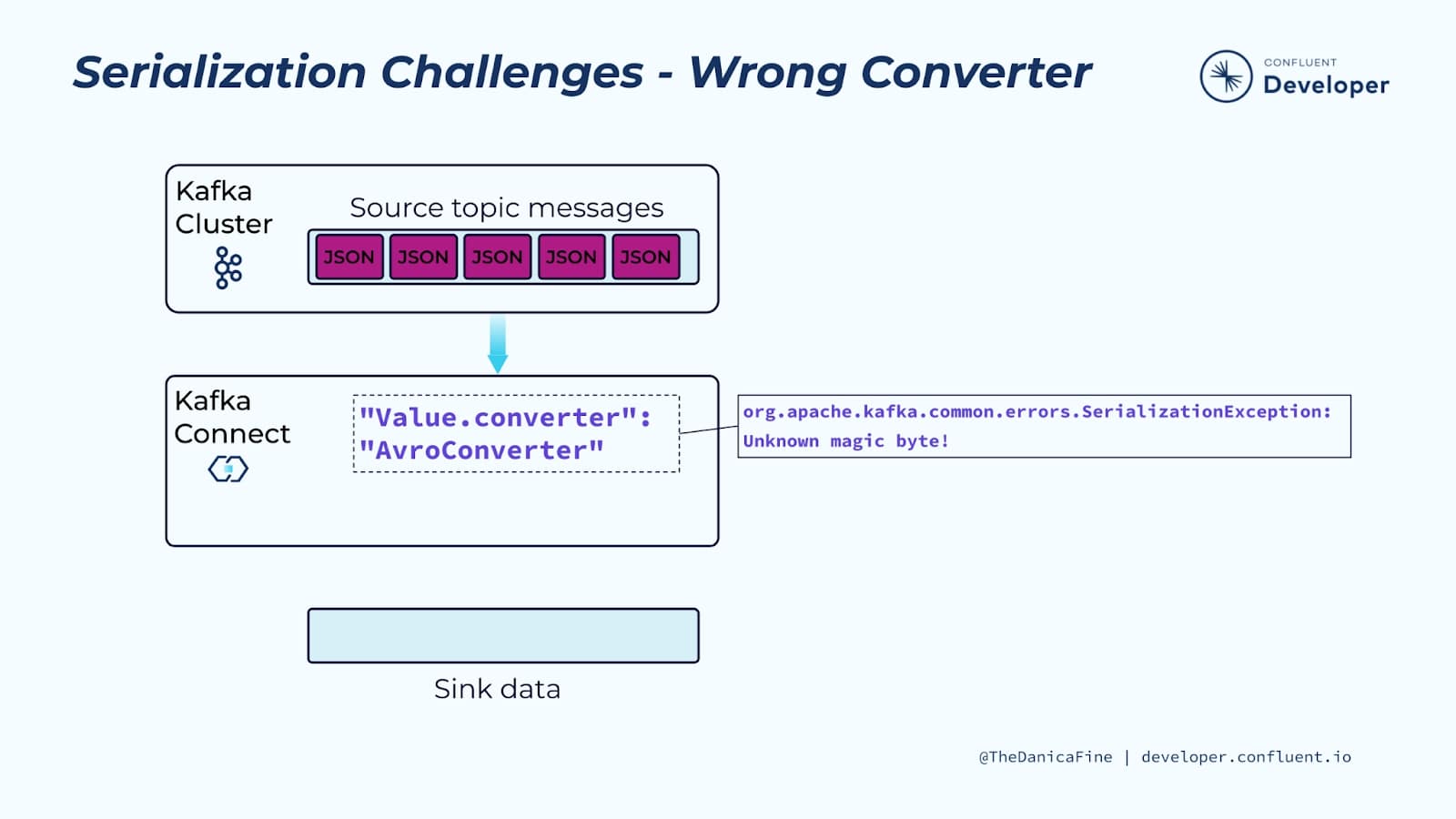 As you set up and try various options with Connect, you might find that you have accidentally configured Connect to use an incorrect converter. For example, if topic messages were serialized as JSON data and Connect attempts to deserialize them using the Avro converter, an “Unknown magic byte!” exception would be triggered.

In this situation, the Avro deserializer is trying to process a message from a Kafka topic, and the message is either not Avro, or it is Avro, but it wasn’t created with the Confluent Schema Registry serializer. Either way, the message doesn’t match the expected wire format, thus the reference to “magic bytes.” The error is quite specific, but basically it means that the data is in a format other than that which the Avro deserializer expects.

The simple fix in this case would be to update the connector instance configuration to use the correct JSON converter. 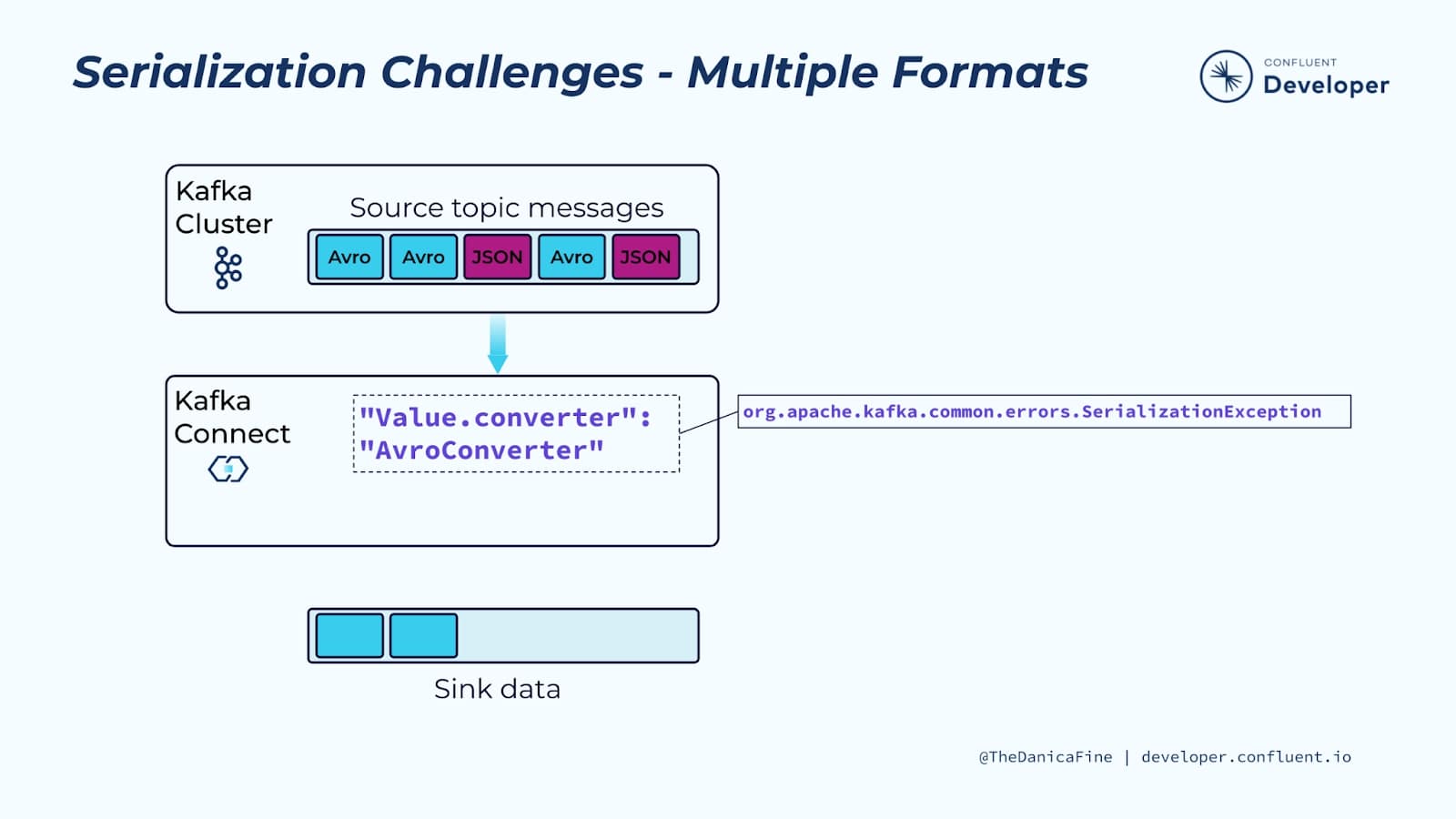 Another scenario you might come across is where a topic contains messages with multiple serialization formats. This might happen if the serialization method was changed for messages being written to a topic, for example, at first the messages were serialized as JSON and then at some point this was changed to Avro. And if the producer clients were not all updated at the same time so that multiple producers were writing the topic using different serialization formats, the topic messages might alternate from one format to another. Since the connector instance can only be configured to use a single converter, exceptions will occur when the converter attempts to deserialize a message with the other format.

You can address both of these scenarios with configuration for error tolerances and dead letter queues. Let’s take a look at these now. 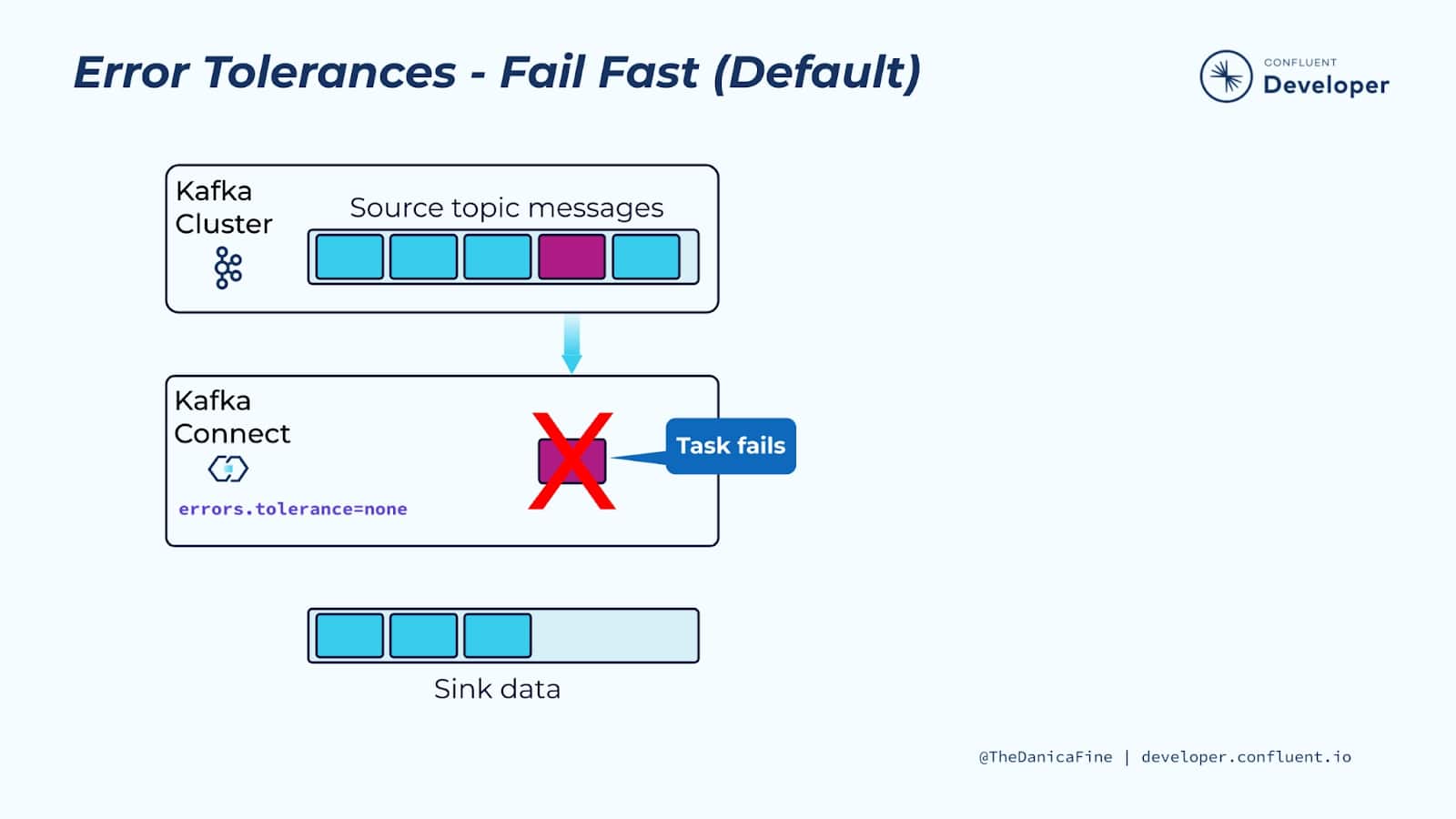 By default, if Connect receives a serialization error like the ones that were just covered, the corresponding connector task is going to stop and you will have to deal with the issue and then restart it. This is safe behavior because if there’s an invalid message, Connect won’t process it. 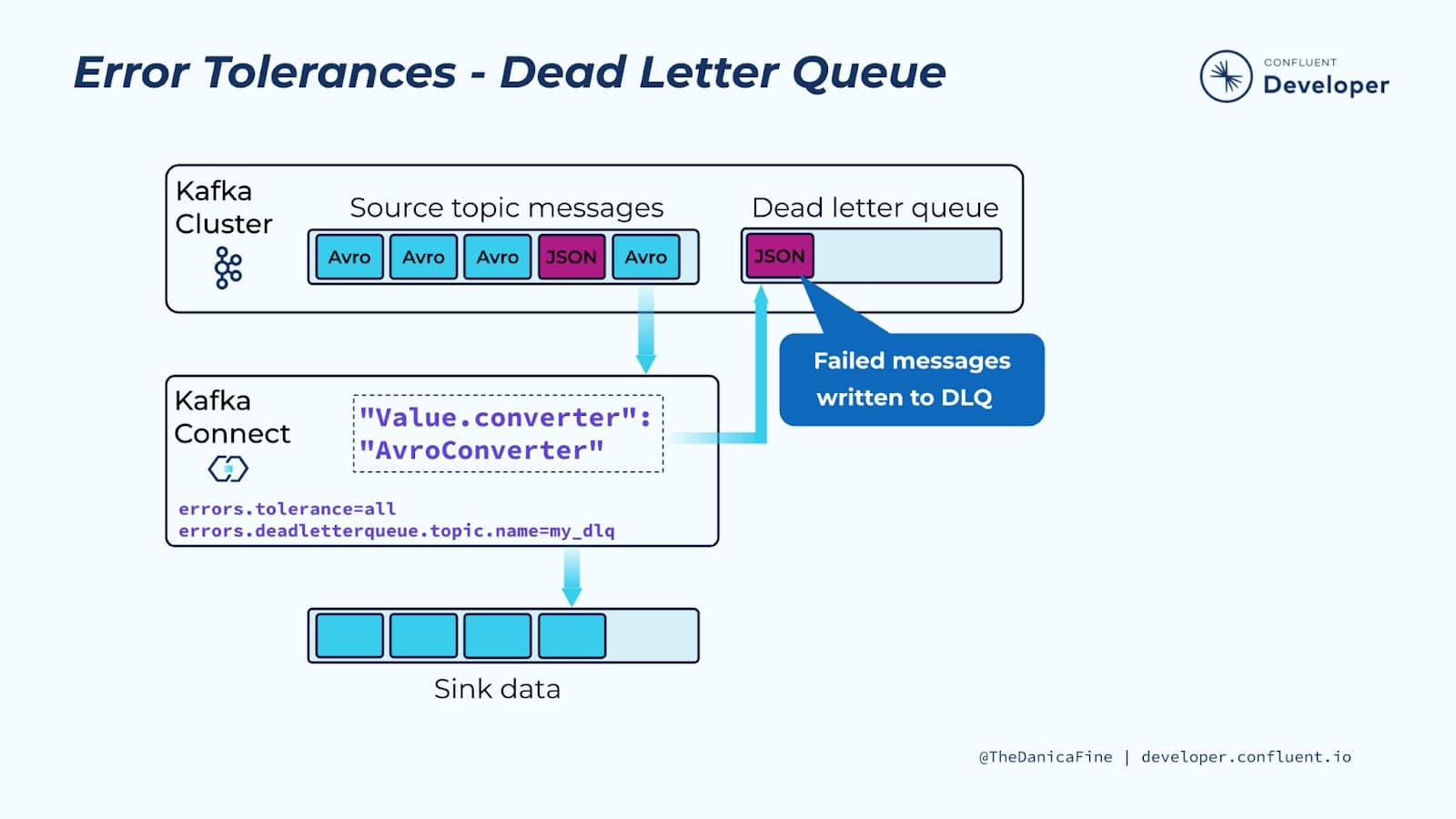 A dead letter queue in Kafka is just another Kafka topic to which messages can be routed by Kafka Connect if they fail to process in some way. The term is employed for its familiarity; a dead letter queue as traditionally conceived is part of an enterprise messaging system and is a place where messages are sent based on some routing logic that classifies them as having nowhere to go, and as potentially needing to be processed at a later time. 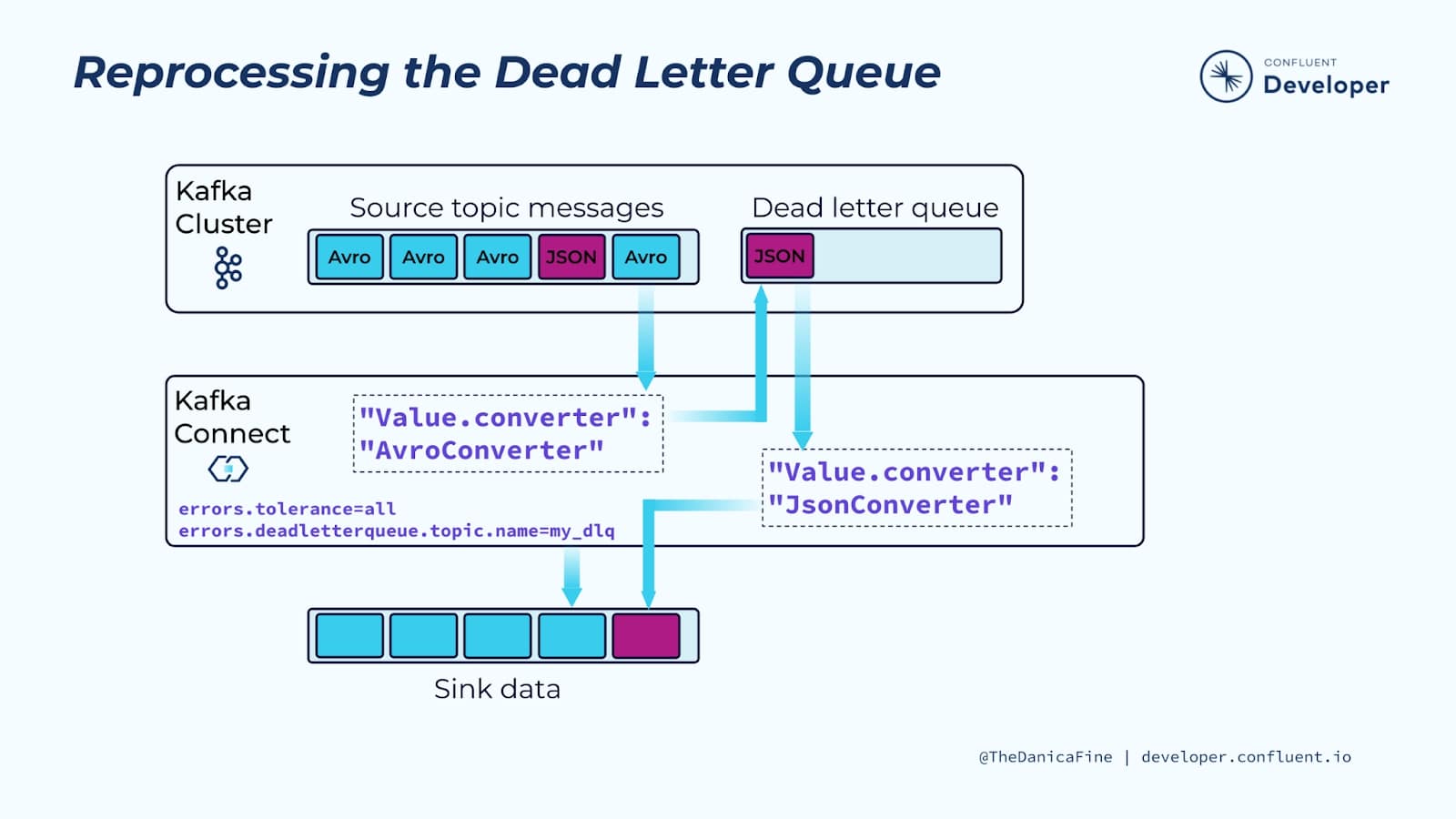 The dead letter queue reprocessing solution is easy to work out computationally, and it’s simple to configure and get running. However, if the option doesn’t exist for some reason or messages are failing for reasons that are hard to identify, you will have to try something else. You may be able to develop a consumer to convert the messages if you know how to deal with a particular failure mode, but often in these situations, you will end up having to manually handle the erroring messages—so you should have a process for a person to review them.

This is ultimately why dead letter queues aren’t a default in Kafka Connect, because you need a way of dealing with the dead letter queue messages, otherwise you are just producing them somewhere for no reason. In effect, you should make sure you have thought through how you will process the results of a dead letter queue before you set one up.

We hope you enjoyed following along in these Kafka Connect modules and exercises. We’ve learned so much together, and we can’t wait to see what you build!