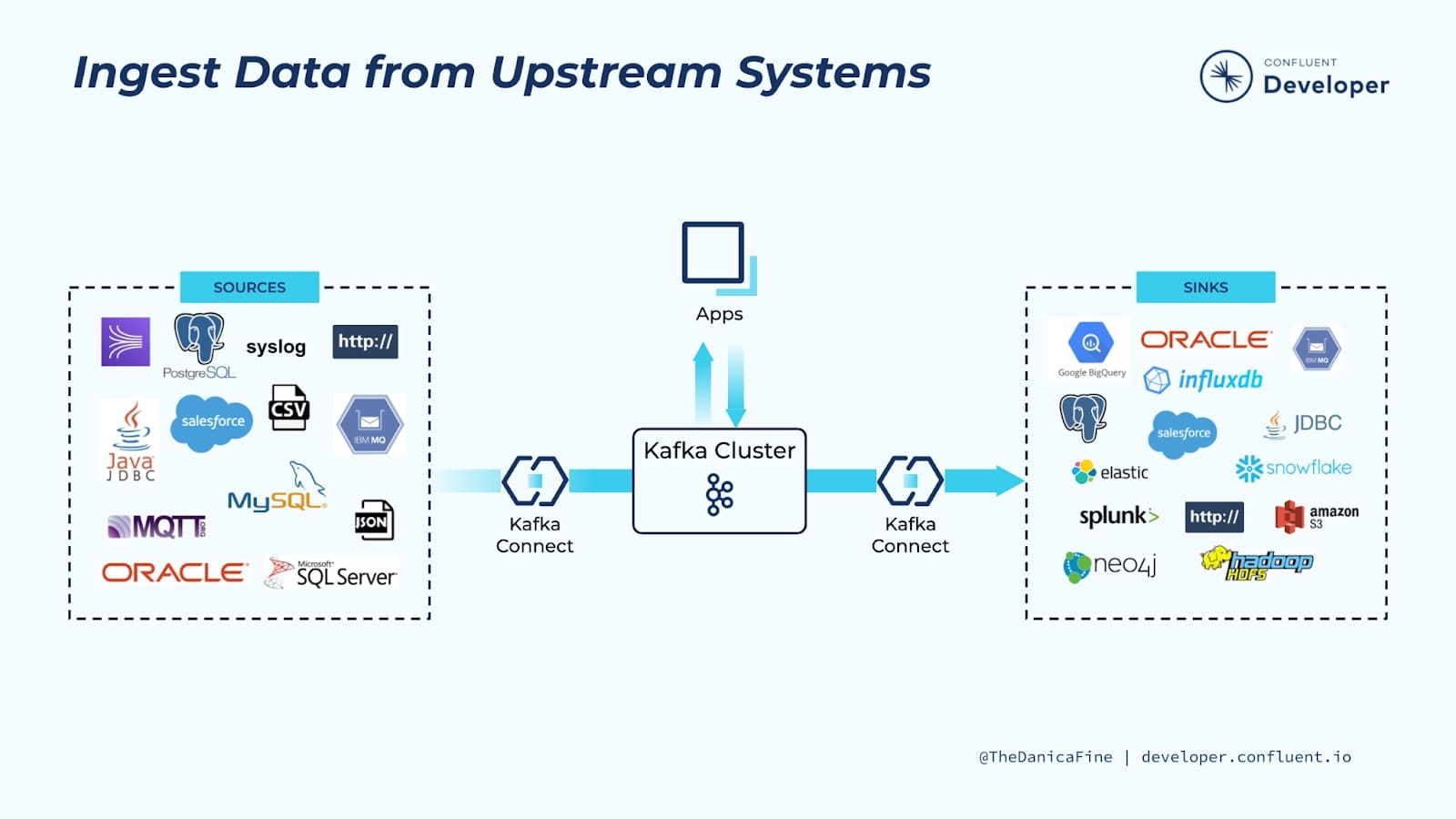 Kafka Connect is a component of Apache Kafka® that’s used to perform streaming integration between Kafka and other systems such as databases, cloud services, search indexes, file systems, and key-value stores.

If you’re new to Kafka, you may want to take a look at the Apache Kafka 101 course before you get started with this course.

Kafka Connect makes it easy to stream data from numerous sources into Kafka, and stream data out of Kafka to numerous targets. The diagram you see here shows a small sample of these sources and sinks (targets). There are literally hundreds of different connectors available for Kafka Connect. Some of the most popular ones include: 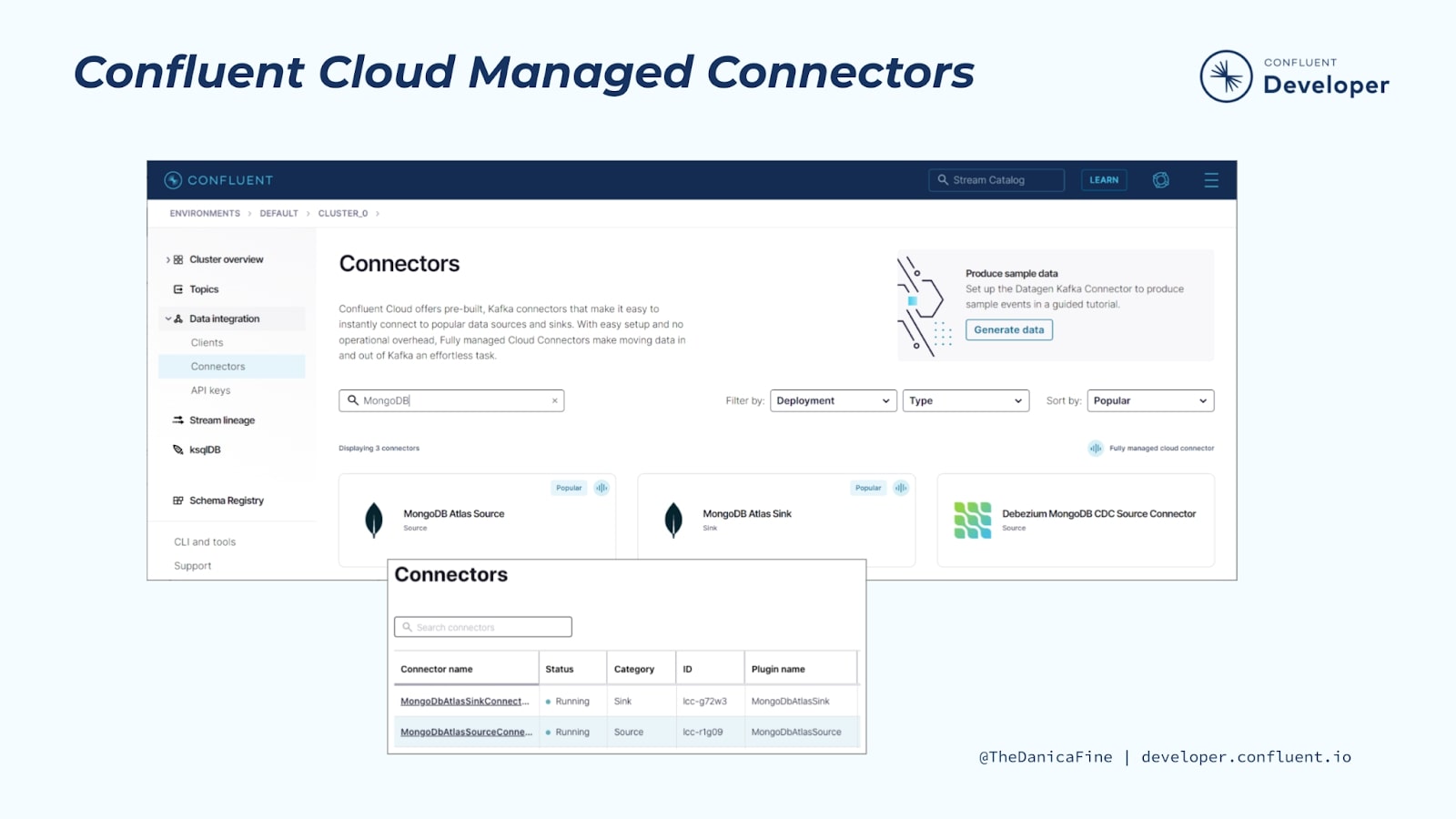 We’ll be focusing on running Kafka Connect more in the course modules that follow, but, for now, you should know that one of the cool features of Kafka Connect is that it’s flexible. 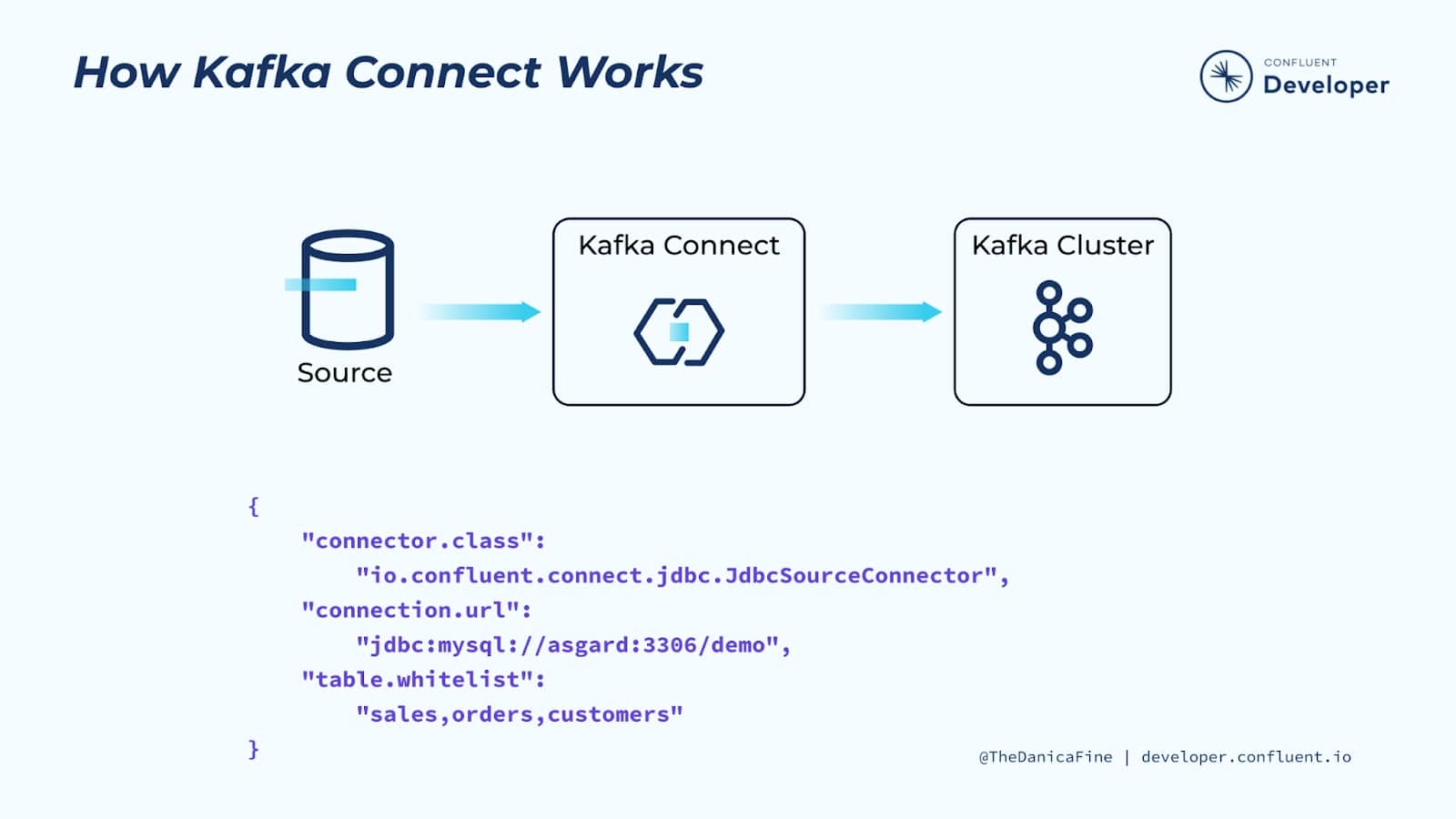 Kafka Connect runs in its own process, separate from the Kafka brokers. It is distributed, scalable, and fault tolerant, giving you the same features you know and love about Kafka itself.

But the best part of Kafka Connect is that using it requires no programming. It’s completely configuration-based, making it available to a wide range of users—not just developers. In addition to ingest and egress of data, Kafka Connect can also perform lightweight transformations on the data as it passes through.

Anytime you are looking to stream data into Kafka from another system, or stream data from Kafka to elsewhere, Kafka Connect should be the first thing that comes to mind. Let’s take a look at a few common use cases where Kafka Connect is used. 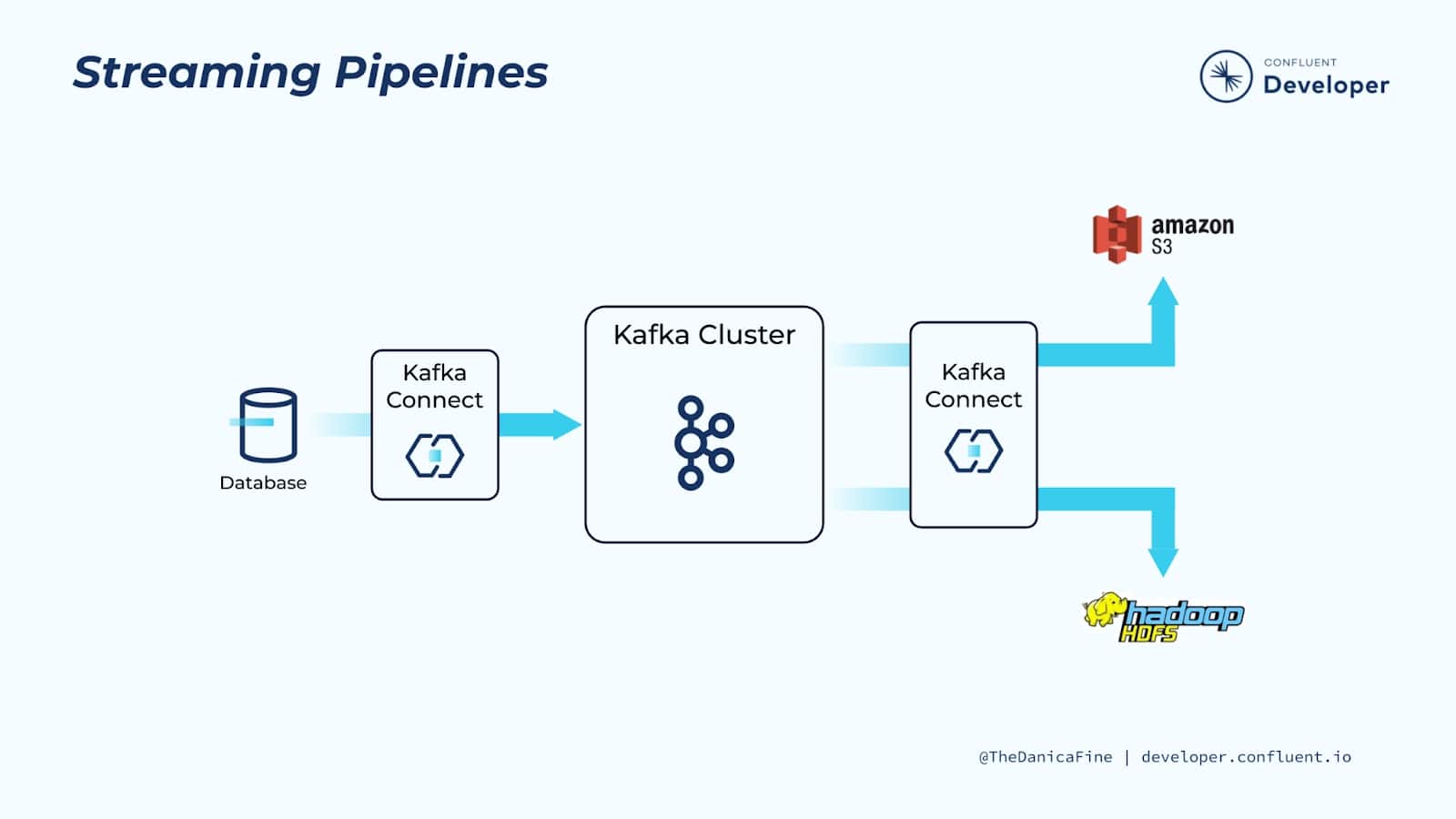 Kafka Connect can be used to ingest real-time streams of events from a data source and stream them to a target system for analytics. In this particular example, our data source is a transactional database.

We have a Kafka connector polling the database for updates and translating the information into real-time events that it produces to Kafka.

That in and of itself is great, but there are several other useful things that we get by adding Kafka to the mix:

Because Kafka stores data up to a configurable time interval per data entity (topic), it’s possible to stream the same original data to multiple downstream targets. This means that you only need to move data into Kafka once while allowing it to be consumed by a number of different downstream technologies for a variety of business requirements or even to make the same data available to different areas of a business.

Writing to Datastores from Kafka 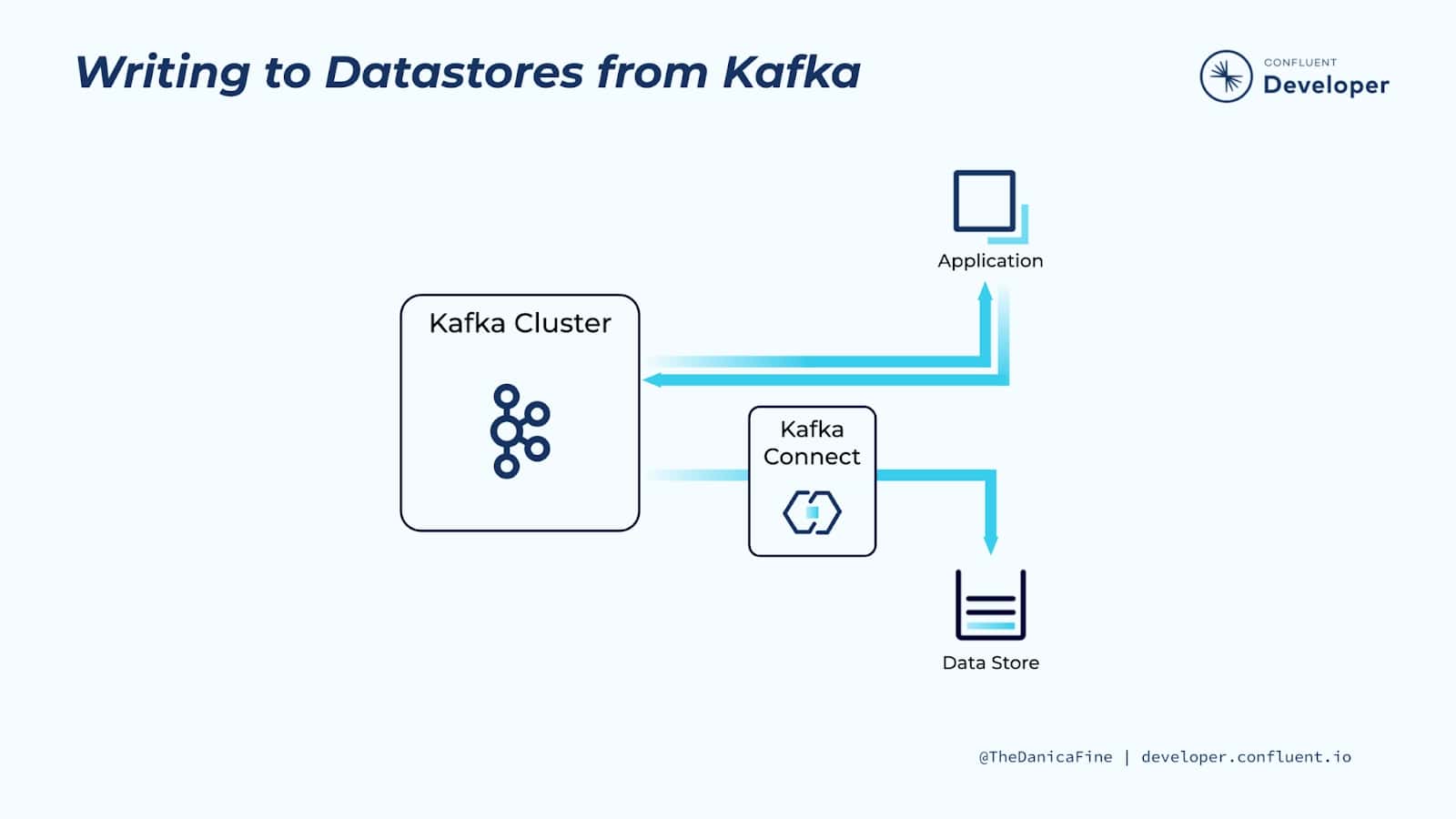 As another use case, you may want to write data created by an application to a target system. This of course could be a number of different application use cases, but suppose that we have an application producing a series of logging events, and we’d like those events to also be written to a document store or persisted to a relational database.

Instead, you could add a few simple lines of code to produce the data straight to Kafka and allow Kafka Connect to handle the rest. As we saw in the last example, by moving the data to Kafka, we’re free to set up Kafka connectors to move the data to whatever downstream datastore that we need, and it’s fully decoupled from the application itself. 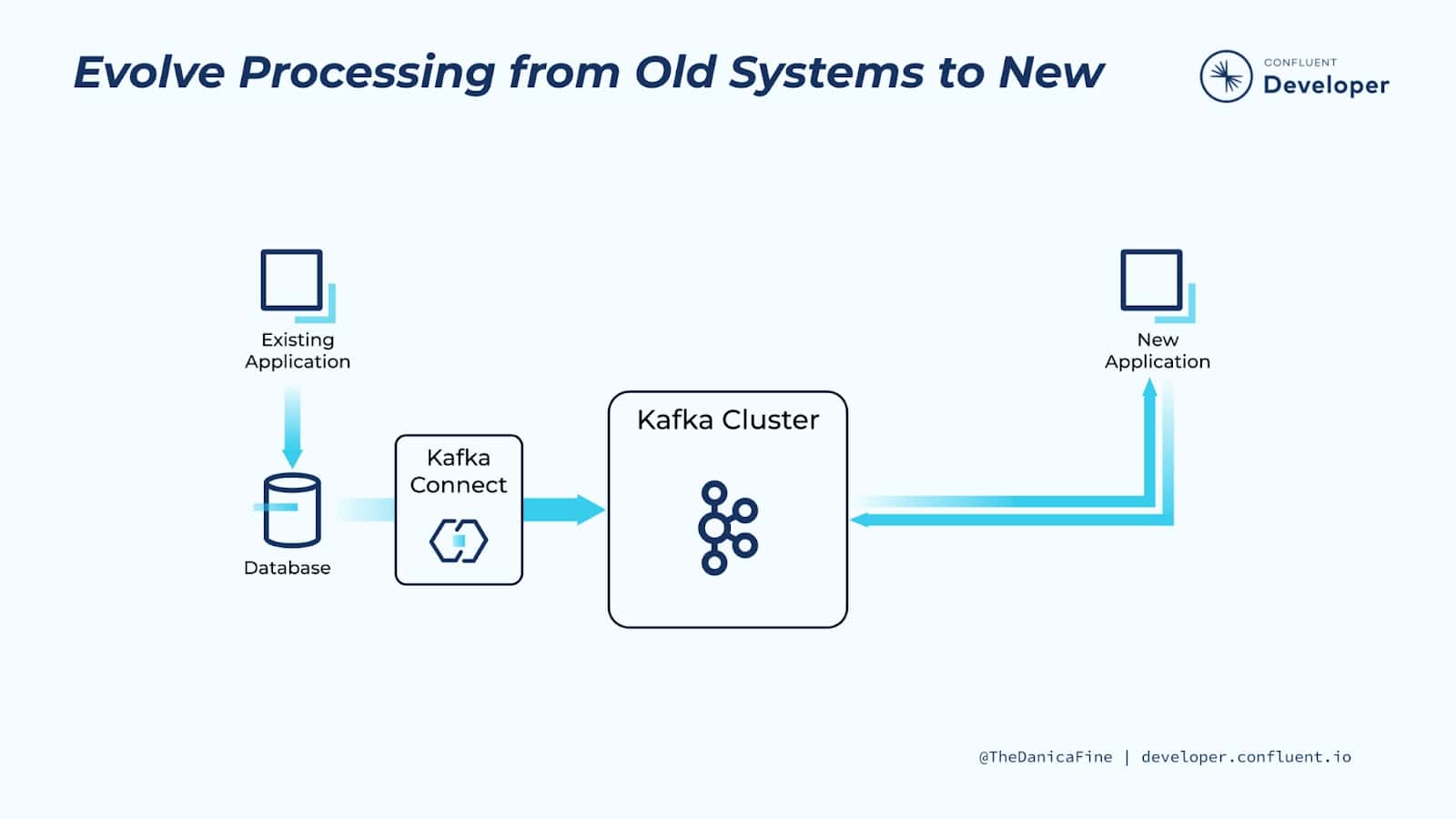 Before the advent of more recent technologies (such as NoSQL stores, event streaming platforms, and microservices) relational databases (RDBMS) were the de facto place to which all application data was written. These datastores still have a hugely important role to play in the systems that we build—but… not always. Sometimes we will want to use Kafka to serve as the message broker between independent services as well as the permanent system of record. These two approaches are very different, but unlike technology changes in the past, there is a seamless route between the two.

By utilizing change data capture (CDC), it’s possible to extract every INSERT, UPDATE, and even DELETE from a database into a stream of events in Kafka. And we can do this in near-real time. Using underlying database transaction logs and lightweight queries, CDC has a very low impact on the source database, meaning that the existing application can continue to run without any changes, all the while new applications can be built, driven by the stream of events captured from the underlying database. When the original application records something in the database—for example, an order is accepted—any application subscribed to the stream of events in Kafka will be able to take an action based on the events—for example, a new order fulfillment service. 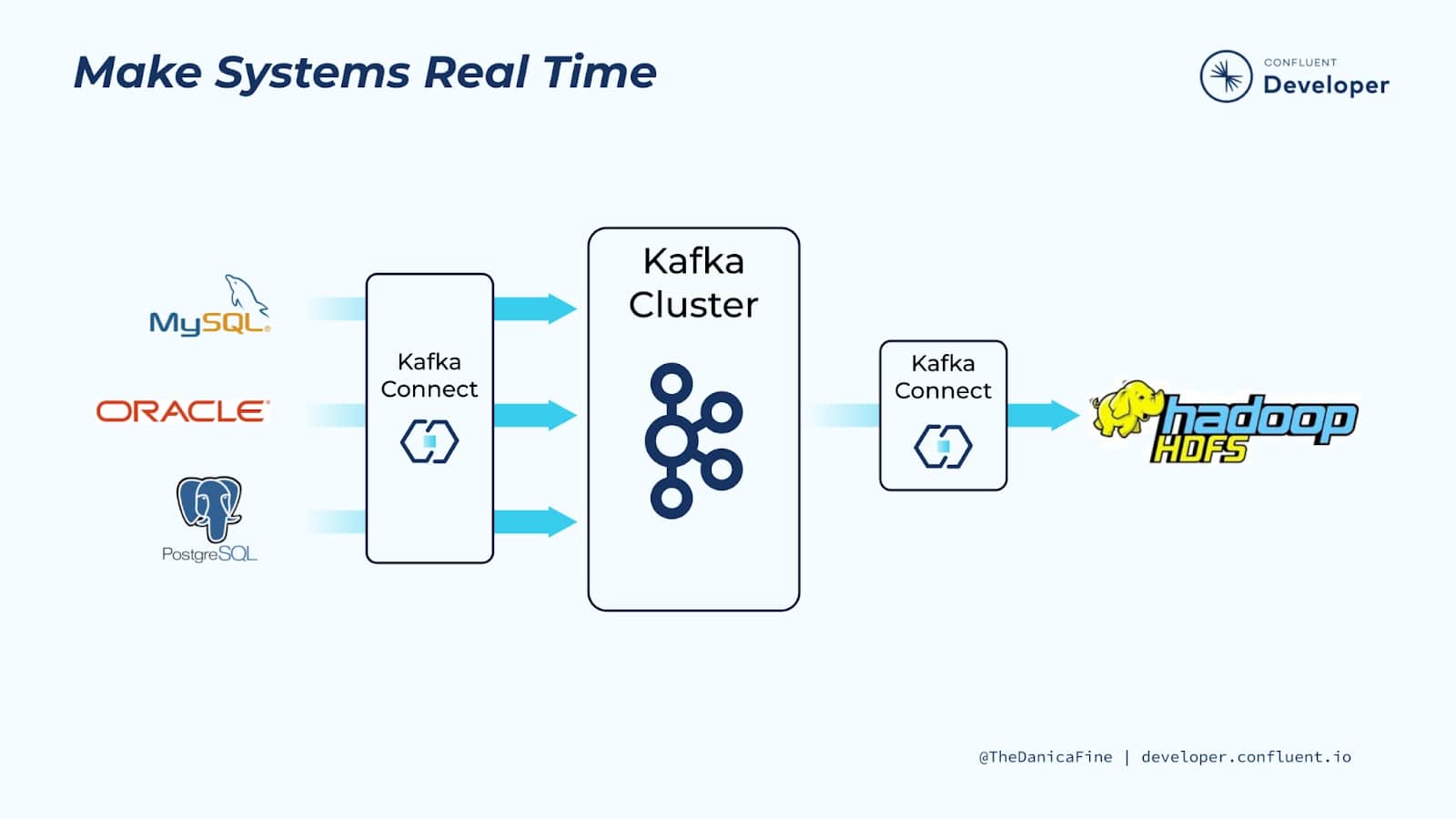 Making systems real time is incredibly valuable because many organizations have data at rest in databases and they’ll continue to do so!

But the real value of data lies in our ability to access it as close to when it is generated as possible. By using Kafka Connect to capture data soon after it’s written to a database and translating it into a stream of events, you can create so much more value. Doing so unlocks the data so you can move it elsewhere, for example, adding it to a search index or analytics cluster. Alternatively, the event stream can be used to trigger applications as the data in the database changes, say to recalculate an account balance or make a recommendation.

Why Not Write Your Own Integrations?

All of this sounds great, but you’re probably asking, “Why Kafka Connect? Why not write our own integrations?”

Apache Kafka has its own very capable producer and consumer APIs and client libraries available in many languages, including C/C++, Java, Python, and Go. So it makes sense for you to wonder why you wouldn’t just write your own code to move data from a system and write it to Kafka—doesn’t it make sense to write a quick bit of consumer code to read from a topic and push it to a target system?

The problem is that if you are going to do this properly, then you need to be able to account for and handle failures, restarts, logging, scaling out and back down again elastically, and also running across multiple nodes. And that’s all before you’ve thought about serialization and data formats. Of course, once you’ve done all of these things, you’ve written something that is probably similar to Kafka Connect, but without the many years of development, testing, production validation, and community that exists around Kafka Connect. Even if you have built a better mousetrap, is all the time that you’ve spent writing that code to solve this problem worth it? Would your effort result in something that significantly differentiates your business from anyone else doing similar integration?

The bottom line is that integrating external data systems with Kafka is a solved problem. There may be a few edge cases where a bespoke solution is appropriate, but by and large, you’ll find that Kafka Connect will become the first thing you think of when you need to integrate a data system with Kafka.

Throughout this course, we’ll introduce you to Kafka Connect through hands-on exercises that will have you produce data to and consume data from Confluent Cloud. If you haven’t already signed up for Confluent Cloud, sign up now so when your first exercise asks you to log in, you are ready to do so. 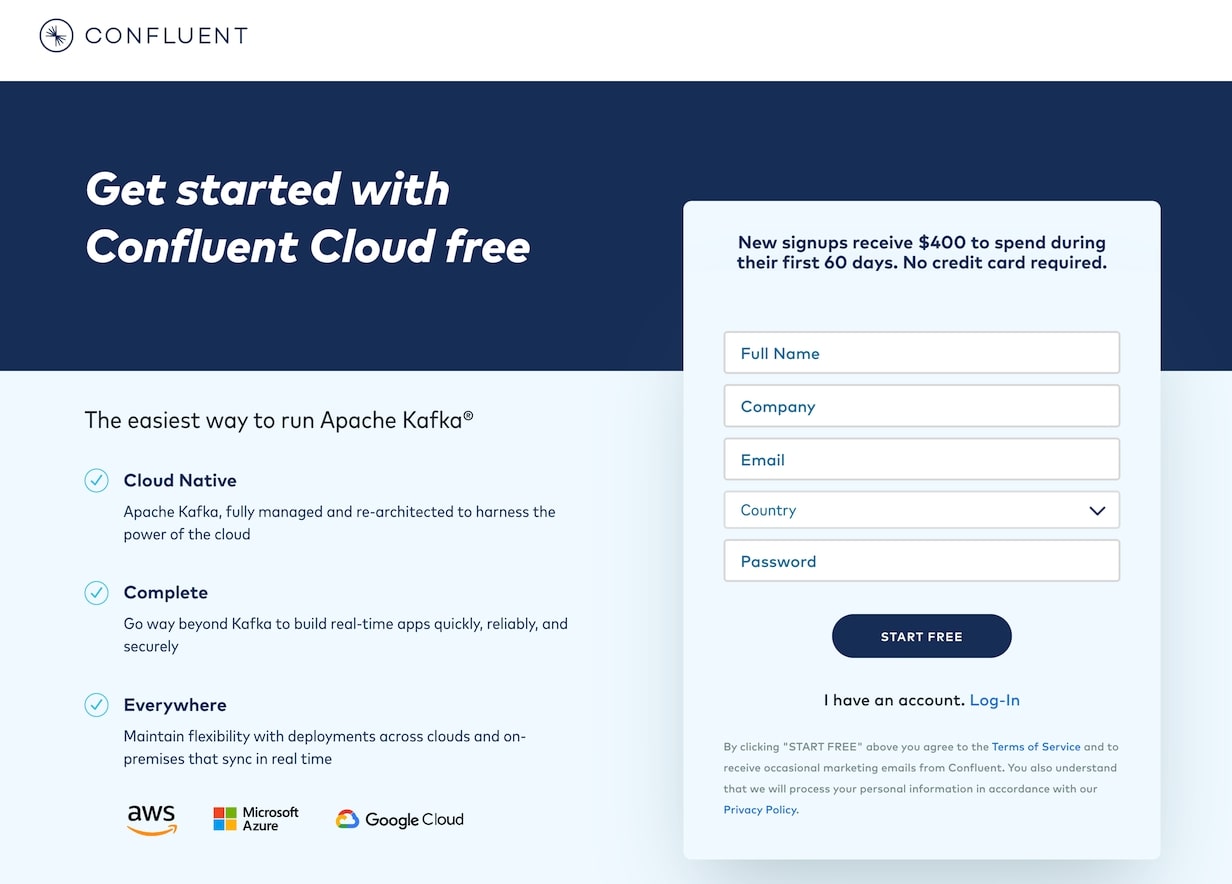 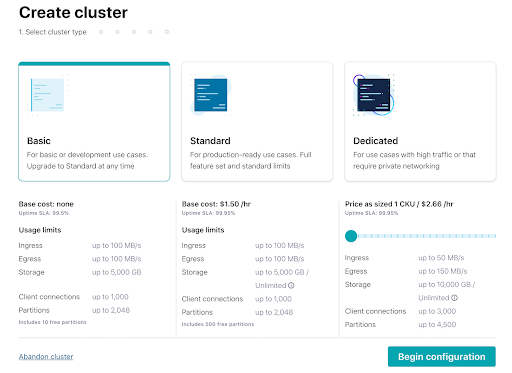 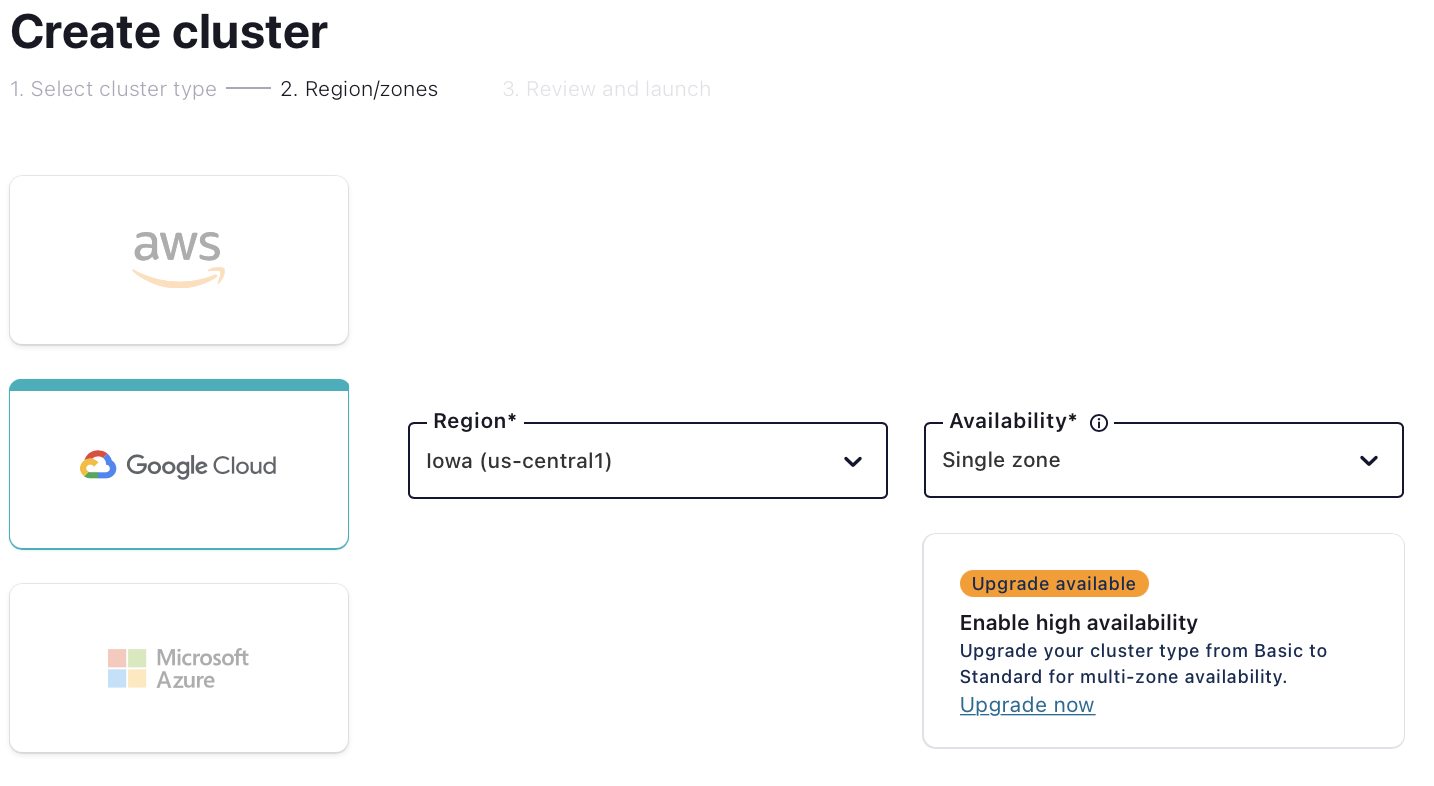 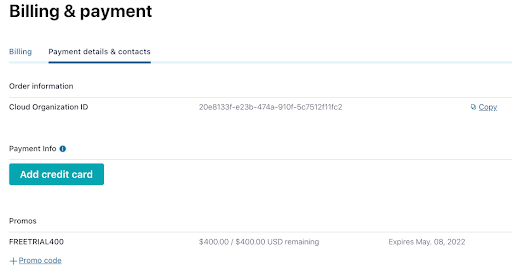 Pipeline to the Cloud – Streaming On-Premises Data for Cloud Analytics

What is Kafka Connect? Basic Fundamentals and Architecture