In this module, you will put what you have learned so far into practice by working with client applications.

This module will wrap up with a discussion on how to use the Gradle and Maven plugins to test your schema.

Here is an example that uses the Confluent CLI to produce to a topic using the schema associated with the topic. A few things to note:

In general, using the Confluent CLI is a great way to quickly test and prototype.

In this example, the Confluent CLI is used to consume records from a topic. In this case the records were serialized using the Protobuf format so you need to provide the associated value format. It tells the consumer which deserializer to use for the record value. Just like producing from the CLI, consuming from the CLI is a fantastic way to quickly test and prototype.

You can also use the console producer and consumer with Confluent Cloud. To do so, you must supply the Schema Registry api-key and api-secret configs.

The console consumer completes the picture for working from the command line.

Now let’s look at integrating Schema Registry with the KafkaProducer and KafkaConsumer clients. Before diving into the specifics, there are some common configuration settings you will always provide whether you are using a producer or a consumer.

Now let’s take a look at the life cycle of a schema with the Kafka clients. 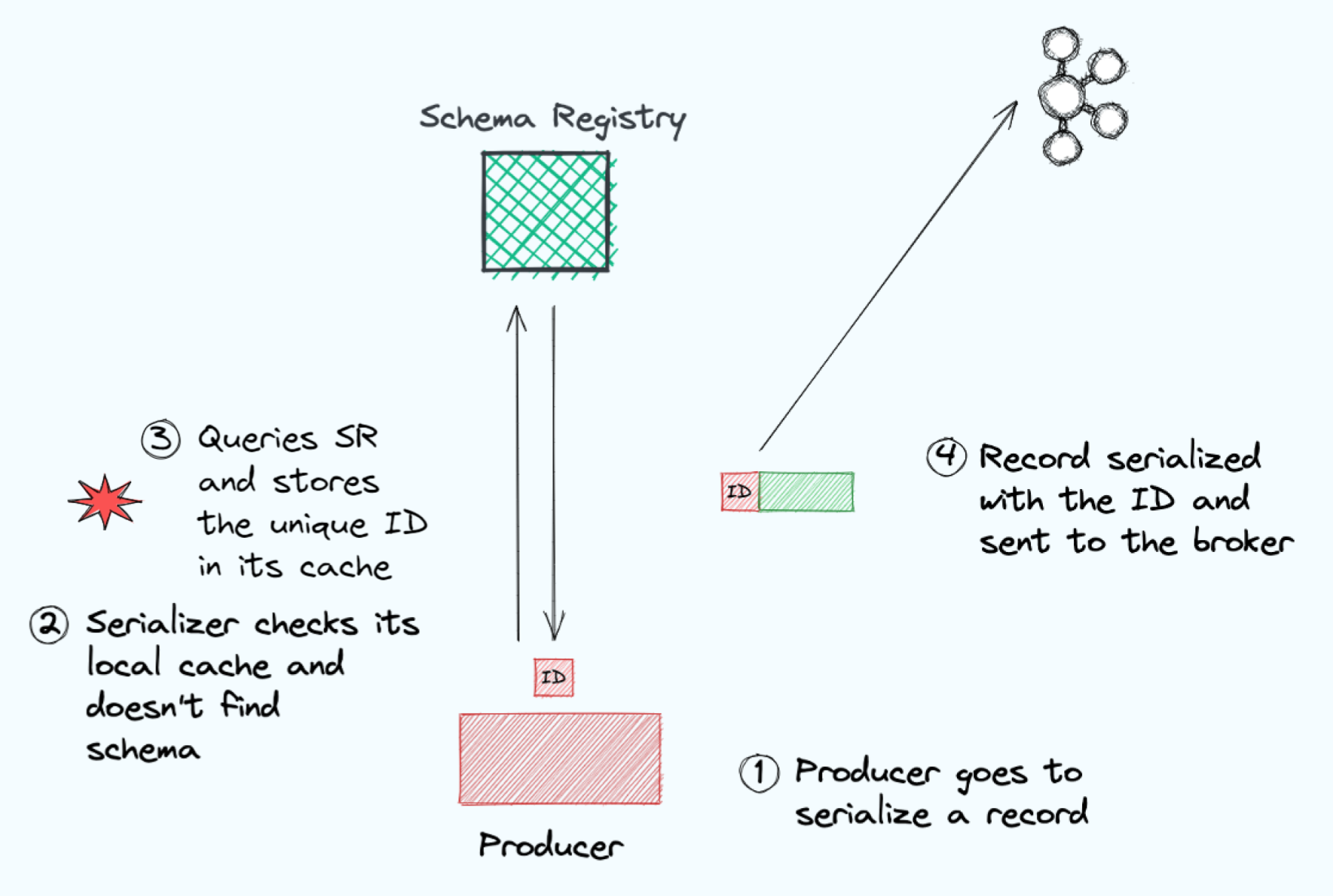 While it is true a Schema Registry-aware serializer will retrieve the schema from Schema Registry, it does so only when the schema has not already been stored in its local cache. This diagram shows how the client interaction takes place with Schema Registry from the perspective of the producer.

When the consumer attempts to deserialize the record, it extracts the schema ID from the bytes that it receives from Kafka and looks in its cache for the schema. If it’s not there it follows the same retrieval process. The most important thing to note here is that unless the schema ID changes due to a schema change, the clients only connect with Schema Registry once to retrieve the schema file.

Now let’s move on to how you would integrate Schema Registry with a KafkaConsumer.

Integrating Schema Registry with a Kafka consumer is much the same as what you do with a producer but in this case you provide a deserializer instead. But with the consumer there are a couple extra configurations you need to provide.

All of the serializers supported by Schema Registry generate objects from the schemas. You saw this in a previous module and did an exercise where you generated domain objects from a schema. Part of the object hierarchy includes a generic type that contains common methods that all generated objects will share. The specific object type generated contains the methods for retrieving the specific fields contained in the schema.

Because of this object structure, you need to tell the serializer if it should return the specific object or the generic object type. 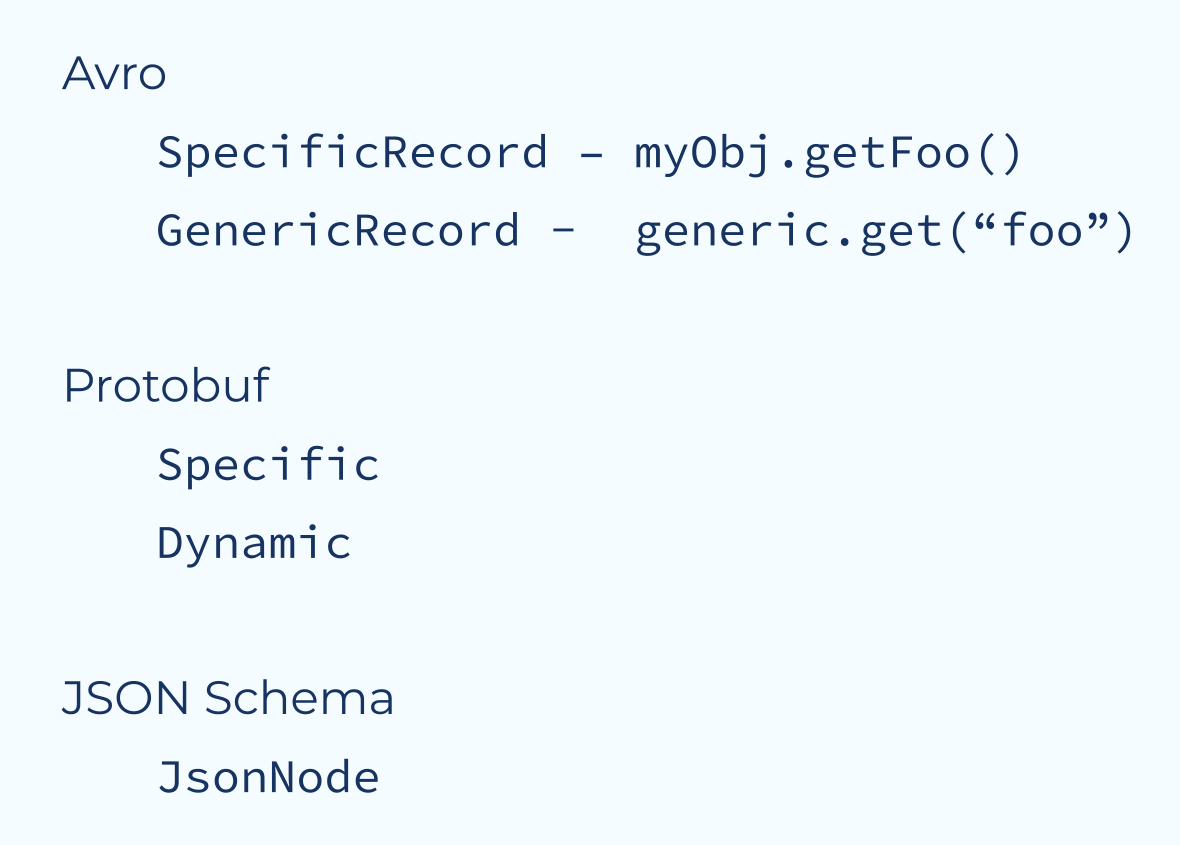 Generated objects from Avro extend both the SpecificRecord and GenericRecord type.

For Protobuf, the specific type is Message and the generic type is DynamicMessage.

For the most part, you will always want to use the specific object types since it’s much easier to access the fields. When building an application, after you’ve generated the domain objects you can use the code completion of your IDE to discover the field names to use.

In some cases you might find that you only know the topic contains Avro or Protobuf serialized records, but you don’t know the exact type. In those cases, you want to use the Generic types. 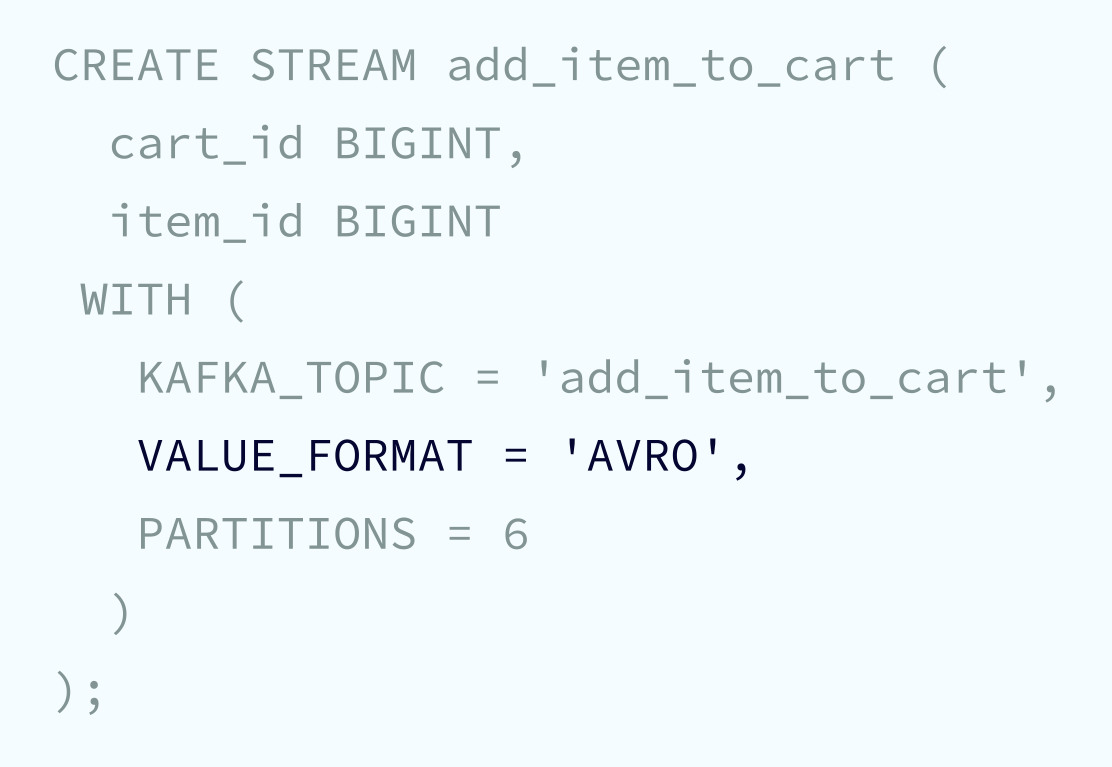 With ksqlDB it’s even easier. You simply provide the VALUE_FORMAT of AVRO, PROTOBUF, or JSON_SR values and ksqlDB automatically retrieves (reads) and registers (writes) schemas as needed. This spares you from defining columns and data types manually in CREATE statements and from manual interaction with Schema Registry. Before using schema inference in ksqlDB, make sure that the Schema Registry is up and running and ksqlDB is configured to use it.