In this module, we’ll shift our focus and look at how cluster metadata is managed by the control plane. 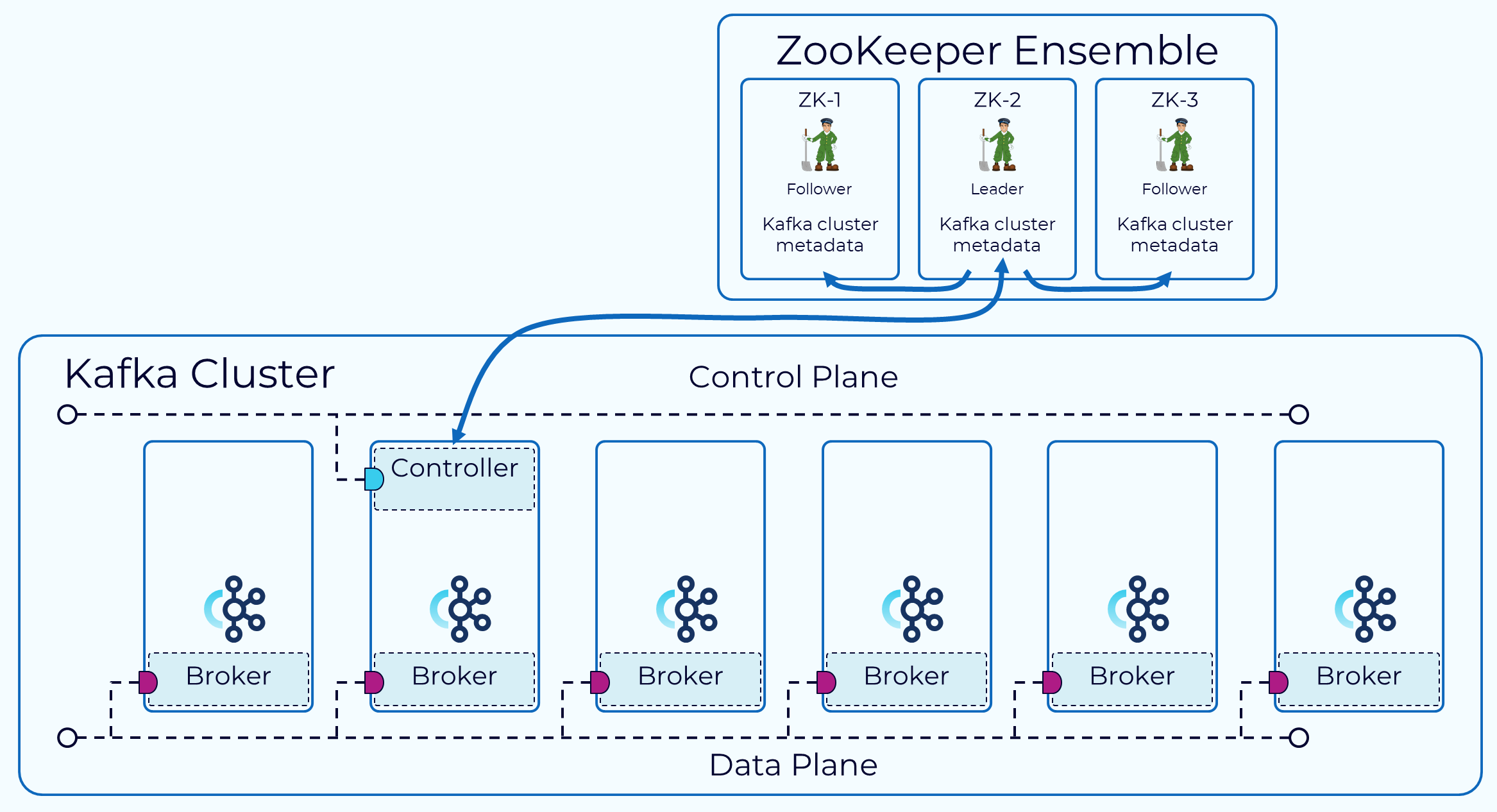 Historically, the Kafka control plane was managed through an external consensus service called ZooKeeper. One broker is designated as the controller. The controller is responsible for communicating with ZooKeeper and the other brokers in the cluster. The metadata for the cluster is persisted in ZooKeeper. 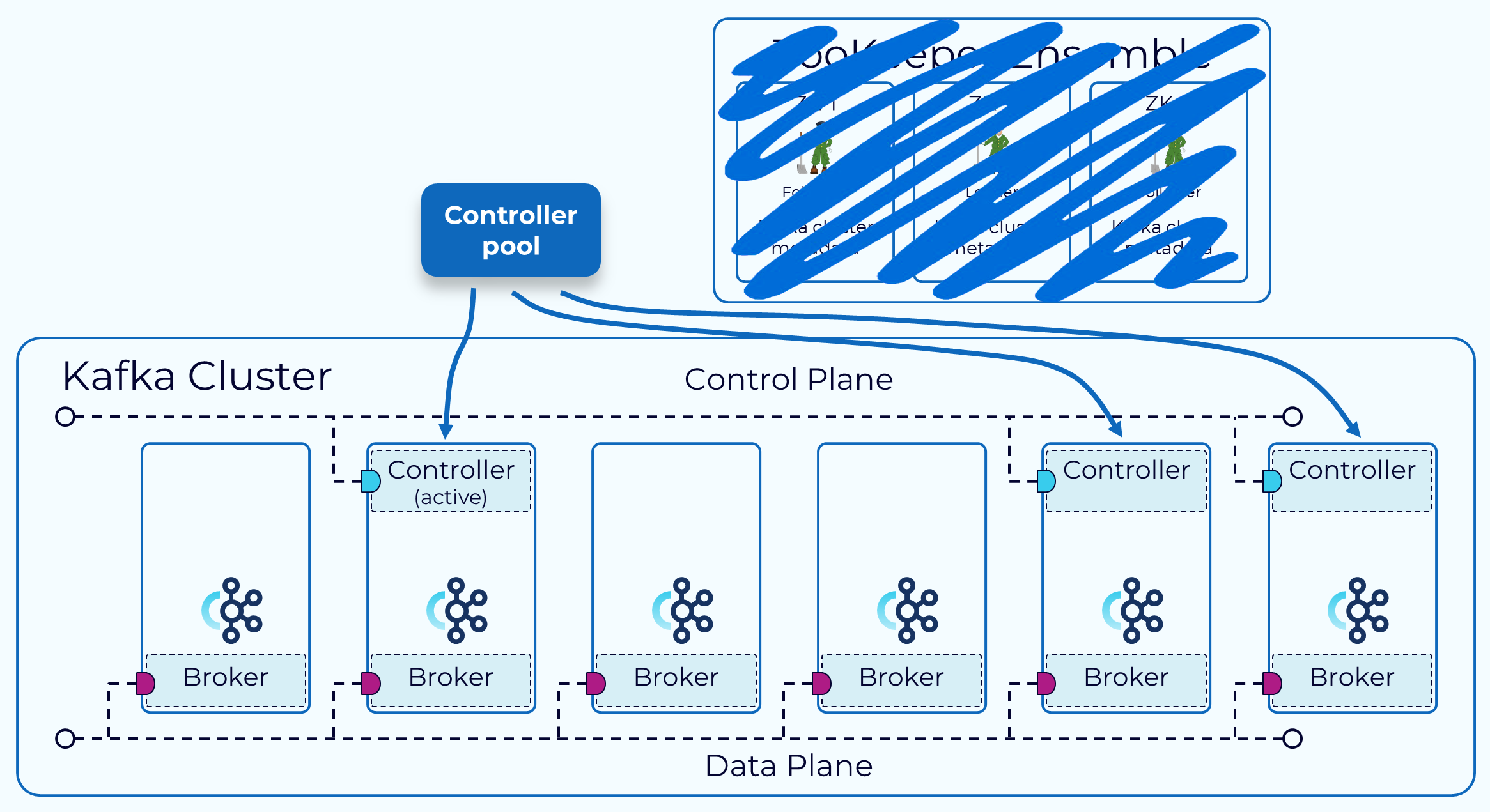 Going forward, the Kafka control plane will be based on a new internal feature called KRaft. The dependency on ZooKeeper will be eliminated. In KRaft, a subset of brokers are designated as controllers, and these controllers provide the consensus services that used to be provided by ZooKeeper. All cluster metadata will be stored in Kafka topics and managed internally.

At the time of this writing, KRaft is still in preview, but it will soon be the default, so we will focus on it for the rest of this control plane module. 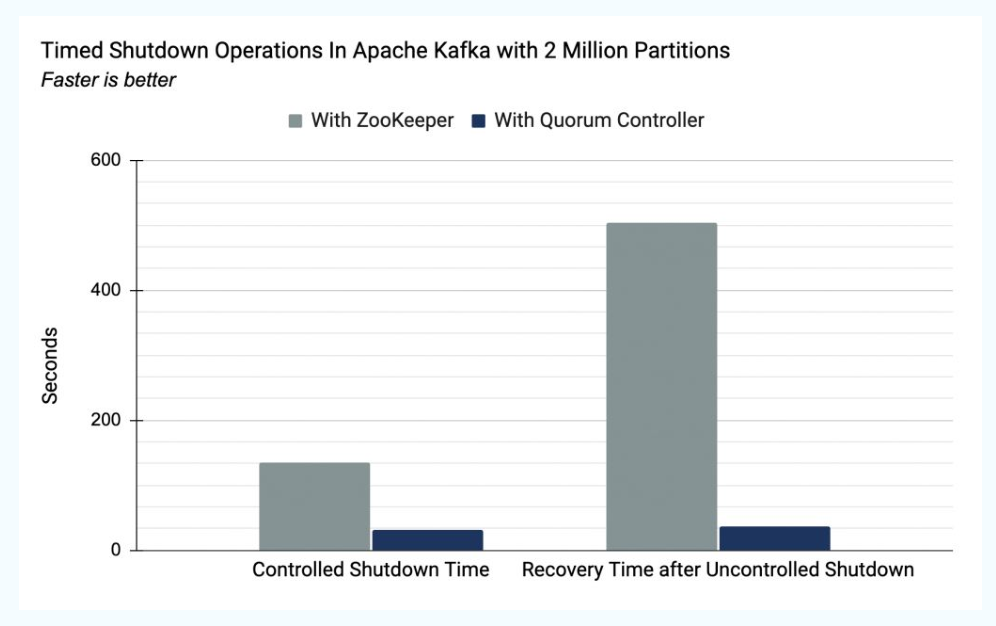 There are many advantages to the new KRaft mode, but we’ll discuss a few of them here. 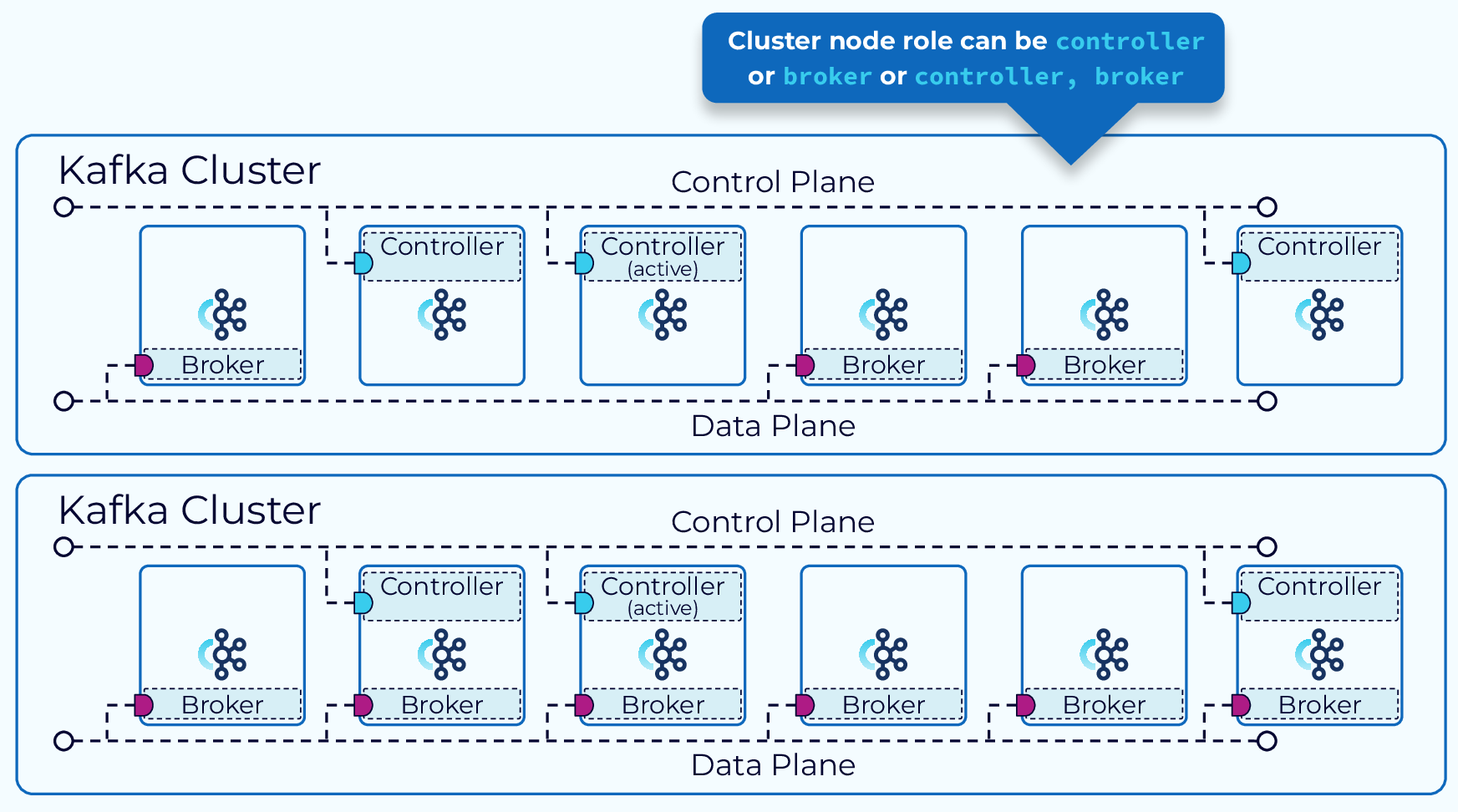 All of the controller brokers maintain an in-memory metadata cache that is kept up to date, so that any controller can take over as the active controller if needed. This is one of the features of KRaft that make it so much more efficient than the ZooKeeper-based control plane.

KRaft is based upon the Raft consensus protocol which was introduced to Kafka as part of KIP-500 with additional details defined in other related KIPs. In KRaft mode, cluster metadata, reflecting the current state of all controller managed resources, is stored in a single partition Kafka topic called __cluster_metadata. KRaft uses this topic to synchronize cluster state changes across controller and broker nodes. 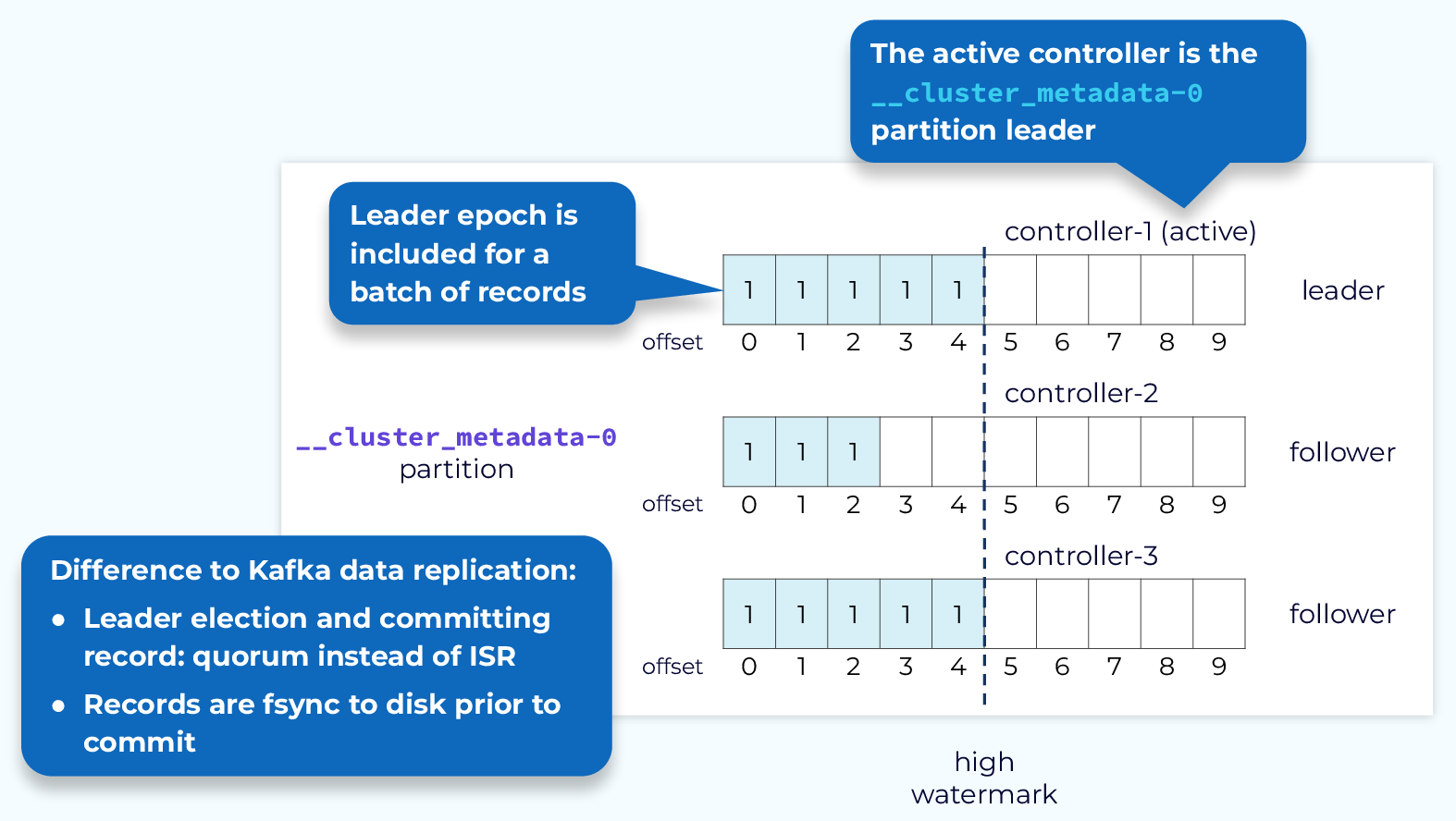 Since cluster metadata is stored in a Kafka topic, replication of that data is very similar to what we saw in the data plane replication module. The active controller is the leader of the metadata topic’s single partition and it will receive all writes. The other controllers are followers and will fetch those changes. We still use offsets and leader epochs the same as with the data plane. However, when a leader needs to be elected, this is done via quorum, rather than an in-sync replica set. So, there is no ISR involved in metadata replication. Another difference is that metadata records are flushed to disk immediately as they are written to each node’s local log.

Controller leader election is required when the cluster is started, as well as when the current leader stops, either as part of a rolling upgrade or due to a failure. Let’s now take a look at the steps involved in KRaft leader election.

When a follower controller receives a VoteRequest it will check to see if it has seen a higher epoch than the one being passed in by the candidate. If it has, or if it has already voted for a different candidate with that same epoch, it will reject the request. Otherwise it will look at the latest offset passed in by the candidate and if it is the same or higher than its own, it will grant the vote. That candidate controller now has two votes: its own and the one it was just granted. The first controller to achieve a majority of the votes becomes the new leader.

After a leader election is complete a log reconciliation may be required. In this case the reconciliation process is the same that we saw for topic data in the data plane replication module. Using the epoch and offsets of both the followers and the leader, the follower will truncate uncommitted records and bring itself in sync with the leader.

There is no clear point at which we know that cluster metadata is no longer needed, but we don’t want the metadata log to grow endlessly. The solution for this requirement is the metadata snapshot. Periodically, each of the controllers and brokers will take a snapshot of their in-memory metadata cache. This snapshot is saved to a file identified with the end offset and controller epoch. Now we know that all data in the metadata log that is older than that offset and epoch is safely stored, and the log can be truncated up to that point. The snapshot, together with the remaining data in the metadata log, will still give us the complete metadata for the whole cluster.

When a Snapshot Is Read

Apache Kafka Made Simple: A First Glimpse of a Kafka Without ZooKeeper

Preparing Your Clients and Tools for KIP-500: ZooKeeper Removal from Apache Kafka

Why ZooKeeper Was Replaced with KRaft – The Log of All Logs